Whether it’s an article or a book or just a sentimental email to a loved one, you’ve probably experienced writer’s block. It’s real, and it’s frustrating.

Like anyone else, writers who write for a living also experience the vexing hurdle of not knowing where to start. However, practice helps. Over time, you learn tricks for overcoming writer’s block and motivating yourself to put words on the page, even if those words are initially lackluster. Before I get blocked, let’s get to these, shall we?

This is, hands down, the most useful tip I’ve come across for beating writer’s block. In her book on writing, Bird by Bird, author Anne Lamott explains:

“For me and most of the other writers I know, writing is not rapturous. In fact, the only way I can get anything written at all is to write really, really shitty first drafts.

The first draft is the child’s draft, where you let it all pour out and then let it romp all over the place, knowing that no one is going to see it and that you can shape it later. You just let this childlike part of you channel whatever voices and visions come through and onto the page. If one of the characters wants to say, “Well, so what, Mr. Poopy Pants?,” you let her. No one is going to see it.”

In fact, the only way I can get anything written at all is to write really, really shitty first drafts.

In his book, On Writing, Stephen King calls it writing with the door closed, but the idea is the same: Give yourself permission to be terrible.

So much of writer’s block is actually the emotional block of how other people might react to our writing. To overcome this, write with the mindset that no one will see what you’re writing. Chances are, the words will start flowing. Seriously, I started this post with “Writer’s block is bad,” and while I didn’t keep that piece of tremendously shitty writing, spitting out those words made it easier to keep writing.

As Lamott says, “There may be something in the very last line of the very last paragraph on page six that you just love, that is so beautiful or wild that you now know what you’re supposed to be writing about, more or less, or in what direction you might go — but there was no way to get to this without first getting through the first five and a half pages.”

It sounds hokey, but changing up your environment can help. Research shows that the simple act of novelty plays a crucial role in motivation. According to one University College London researcher, Dr. Emrah Düzel:

“It is a well-known fact amongst scientists that the midbrain region regulates our levels of motivation and our ability to predict rewards by releasing dopamine in the frontal and temporal regions of the brain. We have now shown that novelty activates this brain area. We believe that experiencing novelty might, in itself, have an impact on our dopamine levels.”

In other words, dopamine (the feel-good neurotransmitter), plays a large role in our feeling motivated, and novelty helps us get there. According to the site, this midbrain region (substantia nigra/ventral tegmental) that’s responsible for regulating reward-processing and motivation “responds better to novelty than to the familiar.” Switching things up motivates us.

The simple act of rearranging your office or just moving your laptop to another room might give you the dopamine boost you need to overcome writer’s block. It explains why I somehow manage to get an entire day’s work of worth of work done in a few hours when I leave my home office and work from a coffee shop. The novelty makes me feel more motivated.

Don’t get me wrong. If you’re blocked because you’re overworked and burnt out, you might need a break to recharge and feel inspired. But if that doesn’t work, and you still don’t know where to start, don’t wait for the Inspiration Fairy to smack you in the face with a bunch of brilliant ideas.

Writing is an art and a skill, but it’s also a practice. And research, like this study published in the British Journal of Health Psychology, suggests that intention and routine, not motivation or inspiration, is the best way to reach a goal. In the study, researchers divided subjects into three groups to measure how often they exercised in a two-week period. There was:

I mean, it’s fairly obvious when you think about it. Coming up with a simple plan or routine to do the work makes you more likely to actually do it.

We writers like to convince ourselves we’ll sit down and write when inspiration happens to hit us, as if there’s some external force in control of your ability to write.

It’s the mastering of daily habits that leads to creative success, not some mythical spark of genius.

In reality, writing is just like anything else: if you want to get those words on the page, you have to schedule the time to do it. Practicing something requires sticking to a habit, forming a ritual, and showing up. Whether it’s ten words or ten pages, you have to show up.

As writer James Clear puts it:

The work of top creatives isn’t dependent upon motivation or inspiration, but rather it follows a consistent pattern and routine. It’s the mastering of daily habits that leads to creative success, not some mythical spark of genius. Set aside time to write, make it a ritual with a cup of coffee, then sit in your chair and start writing — preferably with the door closed. 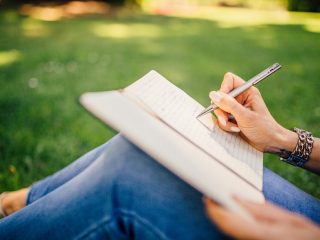 Next Post (n) Juli Fraga on pitching publications and editors