Paulette Perhach is the kind of writer who makes you want to be a better writer. From her viral essay, A Story of a F*ck Off Fund, to her writing in Hobart, The Stranger, the New York Times, and ELLE, her writing is simultaneously smart, funny, and touching. She has a way with words that always leaves you craving more. For example, a line from her recent essay, Risk Mitigation At The Dawn Of My Conceivable Extinction: “At a cafe overlooking the plaza where the Spanish mounted the head of the last Incan emperor on a pike, I order a mojito. It’s a stupid drink to get in Peru, but the whole world’s gone stupid.”

In addition to her freelance writing work, Paulette is also a writing coach and author of Welcome to the Writer’s Life. She lives in Seattle. We asked Paulette a few questions about her writing, her process, and how she deals with writer’s block.

How did you become a freelance writer?

I got started freelance writing the day a freelancer came into our building at work. It was a beautiful summer day in Seattle. The freelancer came for a meeting, then walked through the door to the warm day. I realized I wasn’t allowed to leave, not really. I vowed to become a freelancer that day.

What do you write about?

I like to say my beat is “cool people doing cool things.” But I love to write about almost anything. I like novelty, places I’ve never seen before, and subcultures I didn’t know existed. I thought this was a problem, but one of my editors at the New York Times said, “It’s nice to have someone who’s versatile.” So I feel ok about that.

Ever since I had an article on women and money go viral in 2016, I write a lot about personal finance, a topic I find endlessly fascinating.

What’s your writing process like? Any special tools or apps you use?

I wake up, get coffee, and write three pages. This is mostly crap, but it shows me what’s on my mind. Sometimes patterns emerge that make for stories. I use Scrivener for longer projects, Freedom to block social media, and I make sure there’s something soft within 10 feet of my desk so I can throw my phone away from me without it breaking.

“It felt like such a vote of confidence from so many people and a lesson that your work can really put a dent in the universe.”

When my article, A Story of a Fuck Off Fund, went viral in 2016. It felt like such a vote of confidence from so many people and a lesson that your work can really put a dent in the universe.

Any advice for writers who don’t want to limit themselves to a niche?

As a generalist, I find that I can combine two different worlds to create a new idea that someone in just that niche would not have thought of. So take all the things you write about and see what happens when you combine them.

How can new writers get started when they don’t have much experience?

Study how to look like more of a professional than you feel like right now. Aim to join the little league before you try for the national championships. Start a blog and just write about what you enjoy. Just get moving and take action every day.

How do you beat writer’s block?

I was a daily reporter for three years, so I don’t know what writer’s block is. If I felt stuck, I just copied everything out of my notebook, then I wrote it as simply as possible, like a third-grader. By then, I got rolling.

My favorite thing to do is watch lava drip into the ocean, but that’s not really sustainable as a lifestyle. I love learning auxiliary arts, all the stuff Adobe empowers us to do. Take photos, travel the beautiful Pacific Northwest. And I love reading something that makes me want to be a more dedicated writer. 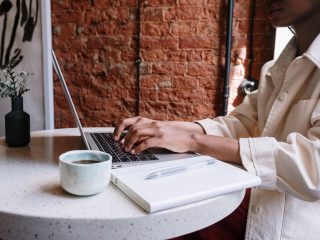 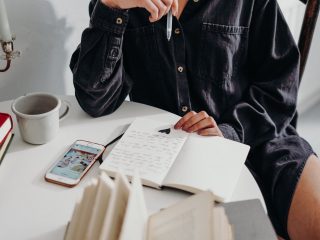